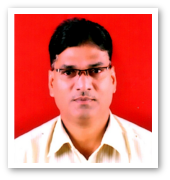 Mr. L. P. Engole is Joined as an Assistant Librarian, in The Central Library IIT Bombay on 5th March, 2012 and currently Incharge of the Reference Section, ETD and Library Building Maintenance related work.

He has been serving at IIT Bombay at different levels associated with various activities of the Library. He is an Executive Committee member of IIT Employee`s co-operative credit society since 2008. He is a Joint Secretary of Group `A , Officers Association IIT Bombay. He also worked as an Executive Committee member of NASA ( 2004 to 2006 ). He is a Life Member of BOSLA Mumbai.